The politics of engagement and spectatorship of the installation space. (publication pending)

Véréna Paravel and Lucien Castaing-Taylor’s film and video installation Commensal was shown at the documenta 14 in Kassel, Germany, 2017. This research examines the phenomenological experience of this installation in opposition to a cinema-based film work made from the same material: Caniba. 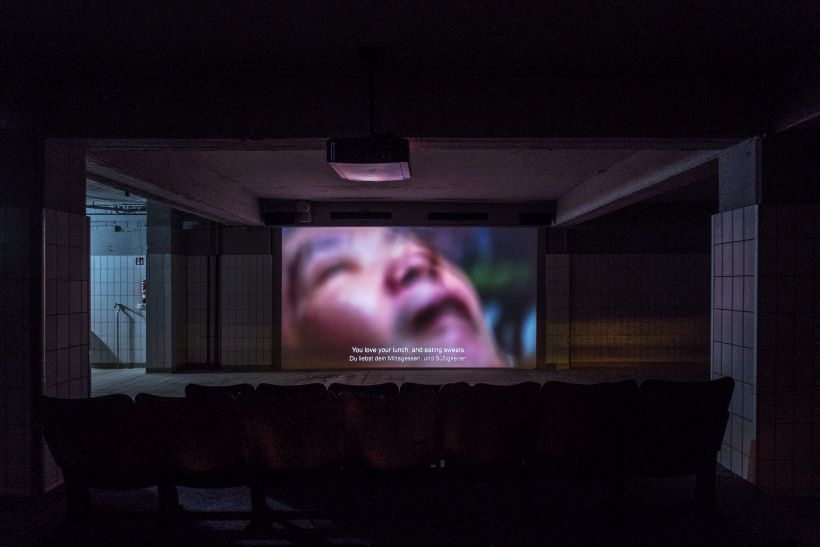 The cinema-space, perhaps especially in the context of the international film festival, remains an important starting point for many non-fiction films that have high artistic aspirations. In recent years, in particular since the documenta 11 international exhibition in 2002, the contemporary art space has also become a frequent context for non-fiction films and videos to be shown.

These two spaces hold different potentialities for the mediation of film, and various factors including the choice of the contemporary art-space for exhibiting non-fiction, the difference between the degrees of agency of the audience, as in the freedom to move about, leave or remain, and the expectations of audiences can have dramatic impacts on how a work of non-fiction is understood. Few non-fiction films have been adapted from feature-length film versions to contemporary art installations, or vice versa, however filmmakers from the Sensory Ethnography Lab based at Harvard University have provided at least two examples that are worthy of scrutiny. Rushes from the 2009 film Sweetgrass by Lucien Castaing-Taylor and Ilsla Barbash were adapted into a looping video installation, Hell Roaring Creek in 2010. This adaptation was not forefront in the minds of the filmmakers – the main focus of the production was on the feature-length documentary, and Hell Roaring Creek was simply put together from one long-take, part of which had been included in the theatrical version. However, since then the potential of the installation space as a site of sensory immersion seems to have captivated the imagination of members of the Sensory Ethnography Lab, who now develop multi-screen installations, often with elaborate sound design.

A version of their 2018 feature-length film Caniba appeared before the theatrical release at the international, large-scale contemporary art exhibition documenta 14 in 2017. This video installation, Commensal, was made using much of the same source footage and sound as the feature-length film, though this seems to have been designed to find its own way of telling the story; using the language of contemporary art rather than that of the cinema. This effort at an alternative way of presenting the same material raises questions about how non-fiction is understood and mediated by different audiences and in different contexts and this example provides a unique case-study to examine the effectiveness and mediation of non-fiction film and/or video in the context of a contemporary art installation 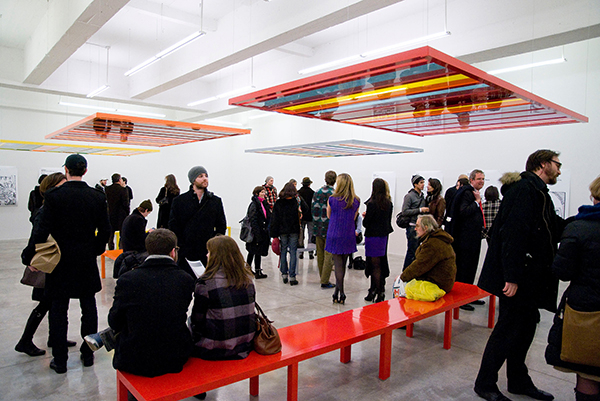 “My work is like the light in a fridge, it only works when there are people there to open the fridge door. Without people, it is not art, it is something else: stuff in a room” Liam Gillick. The picture above ironically shows a Liam Gillick exhibition, with many people talking to each other, and not the art. Except for the guy with the yellow bag, and the two women wearing purple.

The installation space is very different from the cinema-space. Often , video installation work is designed with no beginning, or no end, looping, or with extremely ling pieces that can only possibly be experienced in segments, the point being that the art is there before you arrive, and after you leave. In that sense it is not a show, and may play with the conventions of narrative. Caniba and Commensal are very different experiences because of the contexts for their presentation. One is a narrative, a story, the other a situation.